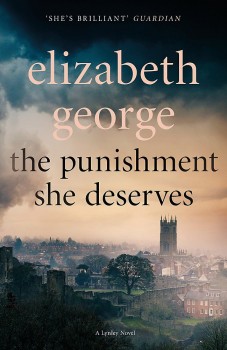 The Punishment She Deserves

A man is found hanged in a disused police station. The victim’s father, a local MP, refuses to believe that it was suicide.

Sergeant Barbara Havers and her senior officer, Detective Chief Superintendent Isabel Ardery, are sent to check out the investigation by the local police into an assumed suicide in Ludlow where a man has been found hanged in a disused police station. The victim’s father, the local MP, refuses to believe that his son killed himself.

Isabel is struggling with her own problems and Barbara is under threat of being removed from her post and is doing all she can to comply with Isabel’s expectations of her. However, she just cannot ignore her own suspicions.  Barbara produces a report which Isabel alters before it is submitted.  Subsequently, Detective Inspector Thomas Lynley accompanies Barbara back to Ludlow and they reopen the investigation – and suicide begins to look to be an improbable cause of death.

The characters are drawn in great depth. The reader sees them in the context of their homes, and more generally in that of the local area and is gradually introduced to their many relationships. In this way the actions of each of the characters can be understood and they make sense as the story unfolds. Indeed, the difficulty in exploring the death relies on the complex web of relationships between the characters in Ludlow.

The character, however, that is explored in most depth is that of Sergeant Barbara Havers. Throughout the book her actions are described in detail, whether it is regarding her reactions to her superior officers, or her ability to empathise superficially with people suspected of wrong-doing, or her inability to enthuse about tap-dancing, or her likeness to a dog with a bone, her inability to let go of things that she feels need investigating. She really is the true success of the book, succeeding in remaining an individual despite every pressure to conform.

It is sometimes difficult to decide whether this book is about Barbara and Isabel or about the very complex web of people involved in the case in Ludlow or indeed about the town itself.  The very length of the book suggests that maybe this very rich amount of information could have been used more selectively, although how it might be pruned is difficult to know.

Whilst the quality of the writing is very good, it’s necessary to have committed a substantial amount of time to the book if not to feel impatient at times. This of course cleverly underlines the frustration felt by Barbara and Lynley. The pace does increase, however, once the focus is shifted onto a family that started out being just minor players in the tale.

So overall, this is a well-written book involving much-loved characters, but it’s rather too long.