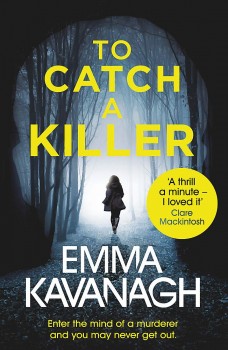 To Catch A Killer

Detective Sergeant Alice Parr is first attender at the attempted murder of an unidentified woman in a London park. As the case expands, she discovers she is chasing a killer, always one step ahead, with her own life in danger.

Welsh author Emma Kavanagh spent the early part of her working life as a police and military psychologist, training firearms officers, command staff and military personnel. Now she has applied much of that knowledge to a darkly brilliant tale of psychological manipulation – a pacey cat-and-mouse thriller with real emotional depth.

This intricate, clever trans-Atlantic story is well told, with some brilliantly drawn characters. While never straying far from its British police procedural roots, it manages to reflect echoes of both Robert Ludlum’s Jason Bourne and Lee Child’s ex-military policeman Jack Reacher. But To Catch a Killer is beautifully-written and expertly paced – it’s top-class crime writing and in no way a copycat exercise.

The narrator, Met Detective Sergeant Alice Parr, is walking in to work when a stabbing is reported in a park only minutes from where she is. She finds a well-dressed woman stabbed and with her throat cut – and a passing paramedic already in attendance.

Together they manage to save her life, but the normally routine business of identification, let alone establishing a motive for the attack, proves near-impossible as no one seems to recognise the critically ill woman who goes down in police records as a ‘Jane Doe’.

Dogged police work sees Alice succeed, but she uncovers a trail of other crimes, which point to a strong American connection. Meanwhile, attempted murder has become a full-blown killing.

Alice realises she is dealing with a determined and highly intelligent and manipulative perpetrator who is prepared to don any disguise and to destroy anyone they believe may be a threat. As Alice finds a link to a New York detective and crosses the Atlantic to enlist his help, what started as an attack in a London park expands to include other attempted and actual murders, identity theft, arson and fraud.

The killer always seems to be one step ahead and their ability to change identities almost at will allows them to uncover Alice’s own secret – her fear of fire following an accident which left her badly facially scarred – a secret they are quick to exploit.

The fast-paced story, while still taking the time to flesh out backgrounds and characters, maintains a tight grip on the reader with constant developments – and the continual sense of threat from the unknown killer.

Eventually it arrives at some kind of resolution after plenty of revelations, but the clever plot does not actually conclude, which leads me to believe this may be the start of at least a second book. I hope this is true, because I enjoyed what I hope is the overture and look forward to the main event. If I have a tiny niggle it is that both killer and police at times seem to be blessed with remarkable amounts of luck, but although the pace of the plot requires some leaps of faith, it always manages to stay just about believable.