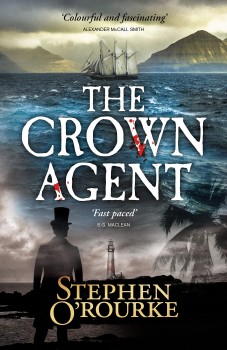 Disgraced young Edinburgh doctor Mungo Lyon is recruited by the Crown to investigate a murder and shipwreck.

Forget the undoubted resemblance in both setting and plot to John Buchan’s brilliant The 39 Steps … This tale of mystery, murder and the ego-maniacal ambitions of a Highland lord, set half a century after the unsuccessful Jacobite Rebellion, stands triumphantly on its own as a piece of Boys’ Own Paper adventure/romance fiction.

Young Edinburgh doctor Mungo Lyon has been disgraced and disillusioned by his association with the surgeon Robert Knox – considered by many the father of the science of anatomy – and his involvement with the grave robbers William Burke and William Hare, also responsible for 16 killings over a period of ten months in 1828. Knox and his staff bought corpses from the two Irish navvies for £8 in the summer and £10 in the colder winters when they would last longer, for dissection at his frequently packed lectures.

A year later Lyon is at his lowest ebb, his mentor vilified for imagined involvement in the murders, and himself disbarred. He is then summoned by the Lord Advocate, Scotland’s most senior minister, and the Collector of Her Majesty’s Customs, an ever-growing source of Crown revenue, and asked to investigate a mysterious murder of a lighthouse keeper and a ship adrift with all hands dead off the west coast.

Lyon, despite his own intelligence and his father’s reputation as a senior official of the East India Company and a part-time agent, is the wrong man for such a task – something he comes to realise as he blunders his way around the Scottish countryside and finds himself out of his depth in a web of smuggling, kidnap, an ancient secret society and treason.

He is helped in his quest by a strange combination of his invalid chair-bound sister – a mathematical genius – and the surprise reappearance of Hare, who disappeared after being freed for turning King’s Evidence against his former partner, who, now employed for his criminal skills and ruthlessness, works as an undercover agent of the Advocate’s department.

This is a classic, colourful and fascinating adventure story from a lawyer and journalist who gained his start in a third profession when in 2012 he won a short story competition run by The Daily Telegraph’s creative writing group – and has now been expanded to provide the basis for his first published work.

O’Rourke is proud of his Scottish west coast heritage, its hardy people and its varied and spectacular land and seascapes and that pride runs through the book. There’s also a growing love interest as befits this type of story, but which he never allows to get in the way of the action. It’s a superb debut for those who like a simple story, brilliantly told with plenty of derring-do.