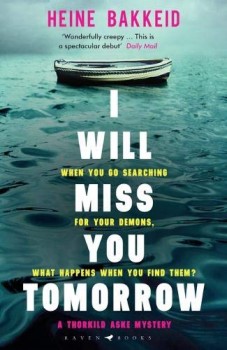 I Will Miss You Tomorrow

A damaged ex-Chief Inspector Thorkild Aske has just left prison, his life in tatters. He is asked to find a young man, Rasmus, who has disappeared off the North Norwegian coast. Rasmus is the cousin of Frei, the woman that Thorkild still loves but whom he has accidently killed.

As disturbed policemen go Thorkild Aske must be one of the most extreme cases gracing the pages of Norwegian novels. The ex-Chief Inspector and former Head of the Internal Affairs is a master of advanced interview techniques and investigative psychology, specialising in the art of manipulation and lies. A complicated personal life and past dramatic experiences have left him with no job, a seriously destroyed reputation, a brain injury, self-loathing, and surviving on a diet of strong painkillers and various other drugs.
We meet him properly as he leaves prison and a psychiatric hospital after serving a sentence for involuntary manslaughter and following a suicide attempt. He still loves and mourns Frei, a young woman that he had killed, and cannot come to terms with being alive and responsible for her death.
Frei’s presence is felt around him all the time. His psychiatrist asks Thorkild to help one of his clients, a Danish woman called Anniken, and search for her missing son Rasmus, Frei’s cousin, who has vanished in the raging sea near the lighthouse he’s been restoring. Anniken’s ex-husband demands that Thorkild either finds Rasmus alive or brings back his body so he really has no choice and nothing to lose.
He travels to a remote island north of Tromsø which is already above the Arctic Circle. Of course his reputation precedes him. When the local police chief and his sergeant vanish after Thorkild has alerted them to discovering the corpse of a faceless woman near the lighthouse, the events take even more sinister turn. And there are thee apparitions and dead souls wandering among people, suspect business dealings, diving, harpoons, mussels’ farm and clairvoyance, and his old boss determined to finally finish him off.
The nature of northern Norway is the other strong character in the novel: dark unforgiving landscapes, danger coming from all directions when the storms rage around the lighthouse, ghosts that appear uninvited and threatening. Most of the action takes place on and around the rugged islands ruled by the weather and the Sea Ghost. Tension is palpable at every step and no one can be trusted in the environment where living often means surviving the elements. But there is also a savage rough beauty in the nature that has shaped the lives of ordinary people and the land. As Thorkild’s state of mind plunges into the worst depths, his body also suffers in these extreme circumstances.
I Will Miss You Tomorrow, translated by Anne Bruce, introduces a complex man who against all odds and very questionable choices seems likeable enough for the reader to feel for him as the chill tightens its grip. Until the very last pages I wasn’t sure whether he would survive the psychological torments, physical agony and the freezing waters of the dangerous arctic seas. This damaged ‘hero’ reminds me so much of Jo Nesbø’s Harry Hole, hated alike by serial killers he had pursued and his own colleagues, yet loved by many women and readers worldwide. As Thorkild seems to evoke similar reactions, I can only admire Heine Bakkeid’s exceptional and engaging writing in his first venture into crime fiction.