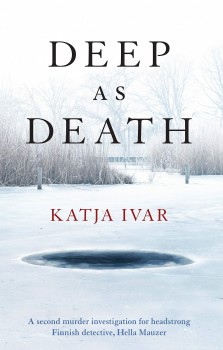 Detective Hella Mauzer, fired from the police and trying to survive as a private investigator, searches for a serial killer who might have been responsible for several deaths, including those of local prostitutes.

It’s February 1953 in Helsinki. A very cold winter in Finland means that frozen sea and ice-covered lakes have taken over the lives of the communities. Detective Hella Mauzer has just returned from her exile in deepest Lapland and has been fined and fired from the police. She’s become a reluctant private investigator, barely scraping any money together and feeling dejected in a small cold lonely apartment, and even less inviting dismal office.
A prostitute floating upside-down in Helsinki Harbour does not present any interest for the capital’s police who would not consider such a death as a high-priority case. Homicide chief Jokela allows his former colleague Hella to deal with it in her capacity as a PI, mainly just to keep her away from the station. When a madam, Kalra Nylund, arrives at Hella’s office door and then another young woman narrowly escapes death in ice-freezing water, found handcuffed to the car by her client, Hella realises that all these events must be connected.
Soon the situation turns into a search for the serial killer and Hella keeps her own investigation going, alongside the official one led by Inspector Erik Mustonen. Her methods differ from the conventional procedures that veer between neglecting poorer victims and appeasing those who are rich and politically influential. As she delves deeper into the snippets of evidence, she is devastated by the discovery that her ex-boyfriend might have been a client of the most famous brothel in the city.
The strong-headed Hella constantly needs to face the charismatic ambitious Mustonen. He is on the path to achieve as much as possible professionally to fit with both the expectations of his father-in-law and the demands of his high-maintenance wife. Yet he may also be hiding dark secrets which allow him to sustain the standards of his own life’s aspirations. The clash between the two ideals is harsh.
A question of morality comes up at every step, professional ethics depending on a point of view, and the whole system seems to be politics-dependant.
While Ivar’s debut Evil Things introduced Hella - stubborn as hell, and a misunderstood feminist ahead of the times - in the cold post-war climate of changes placed in the nearly forgotten Finnish north, Deep as Death expands on the societal themes and personal struggles that this modern heroine must face. With the lightest of touches the author paints a picture of a group of people connected by the criminal events, real and perceived, and delivers absolutely believable authentic characters, true to the times and attitudes.
Although Deep as Death offers plenty of the background story to understand Hella and the reasoning behind her thinking, I would encourage anyone to read the first novel. It will put you firmly in the both politically and climatically chilling Finland of not so long ago, focusing on how life has changed and also how fighting against crime and prejudices continue.
The current story itself could be regarded the manual of perfectly executed manipulation, a truly masterful art of deception handbook where the main player scrupulously justifies every single step while everyone else tries either to survive or to climb the rickety social ladder.
Obviously Hella is not the Machiavellian princess here as she blunders through the investigation, constrained by own loneliness and despair to be loved, and by the tough circumstances of Finnish life in the 1950s. This fine psychological thriller fits firmly in the Nordic Noir sphere, bringing together all elements of the chilling genre and weaving in the private links and social issues.