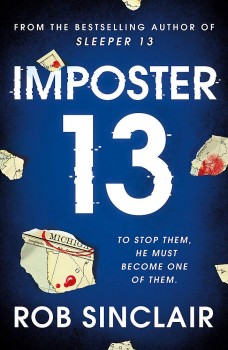 Aydin Torkal – Sleeper 13 – continues his quest to destroy The Farm, the terrorist group that took him as a child, destroyed his family and raised him to a life of violence and hate.

In the two years since he escaped them, working with an often sceptical MI6, he’s been tracking down and killing those responsible. Now the Service needs his help to infiltrate a sinister and dangerous new terrorist cell planning a series of deadly worldwide attacks. To do this, he must convince its American-based leaders that he is one of them.

Amid the usual fog of lies, deceit and betrayal, questionable moral choices and mixed motives which dishearteningly depict the behaviour and methods of Allied intelligence services as disturbingly similar to those of the terrorists, Torkal battles his way towards a totally-predictable end.

The book is well written, fast paced and never threatens to reduce Sinclair’s usual high body count, but there is too much unnecessary and gruesomely excruciating detail in piling up those bodies and on top of that, the story just has too many gaps to convince.

Torkal, who successfully spent a year on the run from the combined efforts of Western intelligence agencies and the terrorists he had deserted, is detected seemingly too easily. And even a man who completely improbably makes SAS troopers look like total wimps, would find it hard to survive the dreadful treatment he is subjected to, being beaten, tortured and shot. There are other questions, too, such as why was MI6 agent handler Rachel Cox, probably the only person who has always believed him an ally in the war on terror, necessary to the story at all apart from minor appearances to establish a link to British and US intelligence.

And why, apart from stressing international involvement in the war on terror, added glamour and sheer foreign-ness, did this pacy but quite horrifically violent story have to take in four of the world’s six continents?

For me, this wasn’t unputdownable but if you like this sort of thing, you’ll love what might be Torkal’s farewell.