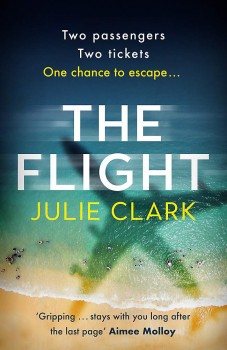 Claire and Eva meet at JFK Airport, New York. But their encounter is brief, and their destinations could be their last.

Claire is the wife of Rory, the latest in line of a political dynasty, dripping-with-money-and-charisma son of a former senator. On the surface, theirs is the perfect marriage. But Rory is the personification of the son who never came to terms with not being his mother’s prince. Behind that smile, he is possessive, manipulative and violent. And Claire is more than suffocating in the ever-tightening grip of his iron fist. She is terrified.

Eva is not honest. She hasn’t been for a long time. And Claire is the latest victim of her poor relationship with the truth when they meet at JFK Airport in New York. But for once, Eva’s victim might get something beneficial and liberating from her scam, not the drugs she normally cooks up in her basement.

They are both desperate to run, hide and reinvent themselves. They swap the briefest of stories, leaving any detail safely buried. Then they swap clothes, destinations and identities.

They are in flight and fleeing their pasts. Despite their hurried plans, it looks like they have got away with it – until one of the planes crashes.

This cosy suspense story is written from two points of view; Claire’s in the first person and Eva’s in the third. The author teases out the women’s backstories that lead them to their chance meeting in between chapters that go forward from that point. Clark has managed to keep clarity for this potentially jumbled alternating who-and-where approach.

The action, suspense and introspection explode from the page immediately. In that respect it is redolent of Gone Girl. And I certainly turned the pages somewhere north of high speed. However, that was mainly thanks to the plot and Claire, who I found a connection with, despite her slightly common-or-garden backstory. But mini critics – little creatures that sit on my shoulders and whisper in my ears – had been niggling with increasingly loud and grouchy voices about Eva’s character. By the end, they were also grumping about the number of conveniences. But back to Eva.

I love amoral characters. They are the stuff of a meaty crime story. Unfortunately, Eva is amoral, but she plays the victim card. Nothing is her fault. She is the woe-is-me innocent bystander who is singled out to be bullied. She is without remorse, and because her work mainly involves secreting herself away from Jo Public, she seems utterly unconscious of the consequences of her metier. Nope. Sorry. I found her increasingly difficult to root for, despite the author trying to gloss over the detail of her criminal career.

The characters’ voices are distinctive, their outlooks complementing their circumstances, and the reader feels the two protagonists’ differing life rhythms. The backdrops are sufficiently explored to give colour but stop short of being characters in their own rights.

I felt a little cheated at the end. Although it was tied up with ribbons and bows, there was an imbalance in the scales of ordeal versus reward. Despite the sense of the clock ticking and everyone running out of time, the danger that surrounded Claire when she was stuck inside the barbed cocoon of her marriage, largely dissipated as soon as she got on the plane.

However, The Flight is a well written, great little escape. It’s one for the beach or a weekend when dirty clouds and heavy rain make you want to curl up under a blanket. Julie Clark is an author I will follow.