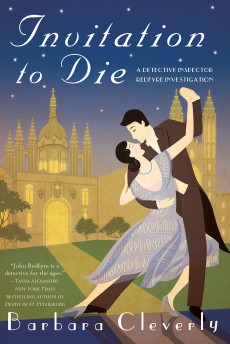 DI John Redfyre discovers a body and uncovers a story of wartime betrayal and multiple murders.

Even at a second attempt, why doesn’t Barbara Cleverly’s new detective protagonist John Redfyre – successor to the author’s successful Joe Sandilands series – really work? She is one of the better contemporary resurrectionists of the Golden Age of crime writing, setting her stories in the 1920s decade of flappers and bright young things. She has tried hard to humanise her detective hero by giving him a cheeky Jack Russell terrier called Snapper and a witty Aunt Henrietta who knows absolutely everyone who counts in Cambridge and beyond and in the phrase of the time would be said to be ‘terribly well-connected.’

But somehow this charmingly old-fashioned mystery presented with Cleverly’s customary expertise and good taste, like the series opener Fall of Angels, just doesn’t strike a chord. Perhaps it is Redfyre himself. The young, handsome and capable Detective Inspector, a war hero, born to one of the better families and raised among the colleges, should be a godsend to Cambridge CID.

He has access to these misogynistic, all-male bastions – a society deemed impenetrable by the local police who are still expected to use the servants’ entrance – who while they pass the port around the High Table, refuse to award degrees to female students. But the earnest, toffish Redfyre, horribly adept at wordplay and prone to quoting Latin ‘bon mots’ actually appears something of a prig despite a good deal of wit and charm. And too many of the supporting characters are near stereotypes – the redoubtable Aunt Hetty and his boss, Superintendent MacFarlane, ‘grammar-school educated with few social graces’, but an intelligent and ambitious Yorkshireman, are prime examples.

Where Cleverly does score is with her sure knowledge of the attitudes, social conditions, science and slang of what we now see as a transitional period in British history. And her occasional digs at the men, ‘smothering female talent, gagging and belittling their wives and daughters’, despite some women now having the vote, are a reminder of the class and gender distinctions of earlier generations.

In early summer 1924 May Balls, punting on the river, flirting, and dancing the tango are the preoccupations of the bright young inhabitants of the colleges. But Redfyre’s summer takes a turn when Snapper discovers a corpse neatly laid on a tombstone in an ancient graveyard adjoining St. Bede’s College and leads him to a trail of multiple murders.

An army greatcoat and well-worn boots suggest the man may have been a soldier, though an empty brandy bottle and ‘An Invitation to Dine’ card eventually lead him to several previously unsolved cases linked to a secretive college dining club.

Redfyre, himself a former Rifles officer, finds himself caught up with a warped group of Dons whose ‘fun’ is to taunt and humiliate those less fortunate than themselves. And there’s an even darker story of revenge, betrayal and injustice going back to the Boer War. With the unlikely assistance of his lead suspect, he gradually unearths the dead man’s story.

As with Cleverly’s original Redfyre story, I found this a reasonably enjoyable book, but often struggled to get into either the characters or the long-winded one-to-one conversations which meant momentum gained by an exciting incident was quickly lost.

Again, like Fall of Angels this story is just too wordy and became a bit of a slog at times. Dunne, the lead suspect, is brilliantly portrayed, almost too much so, becoming at times far more interesting than Redfyre. The ending is intriguing and raises questions about guilt and the process of justice, but overall I expect more from a former winner of the CWA Ellis Peters Historical Dagger.