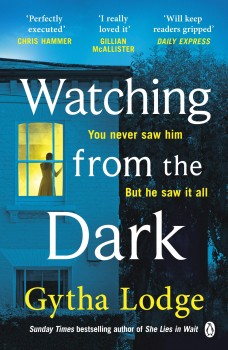 Watching From the Dark

When Aidan Poole logs onto Skype to talk to his girlfriend, he gets a nasty shock. Someone is in the flat with her, but she doesn’t seem to know it. And she’s in danger.

Watching from the Dark is one of those books that grabbed me from the beginning. For her second novel, Gytha Lodge chooses an excellently creepy opening. Aidan Poole has logged onto Skype late at night to talk to his girlfriend Zoe, but something is odd, and although her camera is turned on and he has a partial view of her flat, Zoe isn’t there talking to him.

At first, he thinks she’s teasing him, but then he starts to get worried. Someone is in the flat with Zoe and he doesn’t know who. It’s hard to imagine that could be part of the games she sometimes plays with him, but the moment any of us try to imagine the unimaginable, it often feels like it’s just become an unpleasant reality, which is exactly what happens to Aiden.

Then a slight feeling of irritated titillation turns quickly to horror and Aiden doesn’t know what to do. He’s clearly reluctant to just dial 999 and tell the operator his fears, but the reason for his reluctance isn’t clear, and my sympathies immediately and subtly started to shift …

The set-up was great and I was immediately dragged into the story by the scruff of my neck. I wanted to like Aidan, and to start with, I had sympathy for him, and indeed most of the characters, but Lodge draws her web in such an intricate manner that my sympathies started to shift, wobble and generally meander all around the place as new narratives emerged, linking the characters in different ways and forcing me to re-examine my perceptions and allegiances.

Watching from the Dark is an impressive mix of domestic noir and police procedural and for me, both halves worked alone and together, which is a very hard trick to pull off, especially as the book ran on two converging timelines, past and present, that gradually emerged. I often get very restless in this sort of style, wanting just to stick with a linear narrative, so in theory this should have been a hard sell for me, but it wasn’t. I went happily from one to the other, from Aidan, Zoe and their friends and acquaintances, to the police officers, and sometimes to a mix of the two.

Former DCI Felix Soloman is a good example. He’s a traumatised ex-copper who might have gone to the dark side as a result of his (to start with unspecified experiences in the Job) or might still be one of the good guys. As a character, he could have gone either way, and I would have liked him either way, as well.

The main police characters consisted of DCI Jonah Sheens, and a good supporting cast, including tough, no nonsense Juliette Hanson. I liked them all, which is so rare in crime fiction that it was like the sun coming out from some at times tedious storm clouds in the genre. A surfeit of tortured cops is as unpalatable as a surfeit of lampreys, so it’s great when an author has the confidence to dial back the angst and let some niceness and humour through.

Mind you, I am known for a slightly skewed world view when it comes to characterisation, and I do love ambiguity, and Watching the Dark has plenty of that, so it was bound to be an easy sell for me, and I hope it’ll be the same for everyone else!

And then there’s Zoe. We knew very quickly that she was the victim – there are no spoilers there – but Lodge turns her into a woman that I cared about and wanted to get to know. It was another difficult sell when the natural reaction was for me to distance myself from her to cushion the known loss, but I wasn’t allowed that luxury. I cared about Zoe a lot and wanted to change what happened to her. This is her book, and she remains at the heart of it throughout. I was very, very impressed.