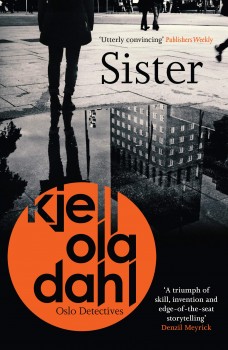 Frank Frølich works as a private detective after being suspended from duty with Oslo Police. He takes on an assignment to find the missing sister of a young immigrant woman who is just about to be deported to her home country. He also gets involved in searching for an eyewitness from a ferry disaster 30 years ago.

Fans of Frank Frølich know that the infamous Oslo detective never takes the easiest route to adhere to an order or a rule to solve a case. Far from it. A catalogue of his misadventures follow him everywhere he goes, whether as a private individual or as an ex-cop known to press people and various police departments.
In Sister he tries to reinvent himself as a private investigator, in the wake of being suspended from duty, and although there is no question about his skills or experience, and pretty strong gut feelings, the assignments don’t exactly flood into the tiny office.
At the insistence of his girlfriend Matilde, Frølich agrees to meet her friend Guri, an employee of the refugee centre who needs help with a female asylum seeker about to be deported and fearing death in her home country. The woman claims to have a sister in Norway. Reluctantly Frølich begins a search for the sister who actually does not want to be found but at least is alive and safe, and when finally confronted she denies having any siblings.
At the same time, another mystery lands in front of this new PI: firstly, a writer Fredrik Andersen wants to know more about the immigration case, and then when Andersen is found dead, his uncle demands that Frølich finds the murderer.
These two incidents are steeped in complicated convoluted and secret details which go back to a maritime tragedy that happened more than 30 years ago. The Oslo – Copenhagen ferry was destroyed in a seemingly endless fire that claimed the lives of 159 people, yet the police overlooked evidence and the killers have never been brought to justice. The past aspect of the background story still has significant bearing on the current times, and as the body count grows and Frølich digs deeper into the connections between various players in the wide network of those who might be responsible, he puts himself at huge professional and personal risk.
I really enjoy the ordinariness of daily life in Oslo and surroundings, and the detailed descriptions of the locations which, seen through Kjell Ola Dahl’s eyes, come alive as the story progresses. They add flavour and authenticity to the procedural strand of the novel, and weave the historical trauma into the modern intricate narration that combines all elements of engrossing and interesting thriller. There’s also tenderness in Matilde and Frank’s relationship, with the underlaying feeling of doom becoming more prominent. Don Bartlett’s translation of Sister is superb and presents the darkness of motives and minds in a suspenseful and confident plot.