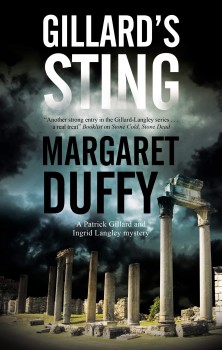 Ex-military and spook Patrick Gillard and his wife Ingrid Langley are pulled back into the action as they try to track down a missing top cop.

I think I’ve read every book in this lengthy series – Gillard’s Sting is number 22 – but blimey, please don’t test me on this latest instalment!

The ongoing saga of crime writer and crime fighter Ingrid Langley and her ex-military and spook husband Patrick Gillard is a veritable alphabet soup of police and government departments – and the couple seem to have worked for the lot over the previous books. But I can’t always remember who’s who within them or how much Patrick, who puts the loose into loose cannon, has pissed them off in the past.

This time out, Patrick, who’s working for an insurance company in Bath, is dragged back into the action when his former NCA boss Commander Michael Greenway turns up on the doorstep and asks him to investigate the disappearance of John Brinkley, a recently retired Met commander. Greenway, though, is a bit stingy with facts and paperwork, to put it mildly, and isn’t always the easiest bloke to track down for extra help.

With me so far? It’s from this point that it all goes a bit hazy in my mind. There’s another cop who wants Brinkley to be found, there’s possible corruption in the mix, plus a load of second division mobsters. And there’s a surfeit of creepy houses as everyone scuttles around Glastonbury, Bath, rural Somerset, Windsor and London in search of the truth.

The books have always been heavy on tell, not show, anchored by Ingrid’s understated and slightly arch narrative. I like her style, but I suspect the tone won’t appeal to everyone. She’s clear-eyed, pragmatic and fully capable of controlling her often reckless hubby. Gillard’s Sting conforms pretty much to the pattern of the earlier books, with plenty of grim things happening, but almost always off-stage.

It’s never clear how old the couple are – I’ve always assumed they’re in their 40s. Patrick has an artificial leg after a military accident, but it doesn’t stop him getting stuck in. And Ingrid juggles the crime fighting with a sketchy background career as a writer and also corralling, with the help of a childminder, a house full of sprogs.

The snag with Gillard’s Sting is that it’s a particularly talky book, anchored in Ingrid’s point of view, and I never felt I got much of an impression of the characters outside of the two leads, hence my confusion. Even series regular DCI James Carrick floats around in the background being vaguely grumpy despite being fairly a significant player. No one gets much in the way of character development, and by the halfway mark I was longing for a cast list so I could remind myself who was who

By the end, there’s a pile of bodies and a faintly bemusing route to getting there. Ingrid seems to have explained or surmised most of it while Patrick, who still has police credentials, disappears into the ether for days on end. It’s all a bit of a plod (‘scuse the pun).

I have a soft spot for this series, not least because I’m fascinated by the two leads. Gillard’s Sting isn’t one of the better books, but what keeps it interesting is Patrick’s increasingly screwed up state and his doubts over what he’s doing and whether he can still operate effectively.