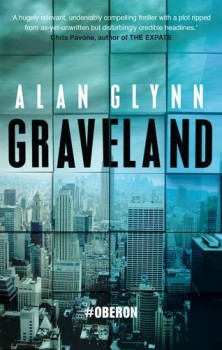 A Wall Street investment banker is shot dead. That night a hedge fund manager is killed. Investigative journalist Ellen Dorsey follows a hunch and opens the door to a world of fabulous riches and staggeringly amoral political and financial manipulation.

This is the final part of Alan Glynn’s loose trilogy of topical conspiracy thrillers. The books mark him out as a writer with a deep understanding of today’s worldwide financial problems and their causes.

This complex story features a host of skilfully interwoven but totally disparate characters and is both an up-to-the minute view of the clash between the powerless mass and the powerful few and a commentary on the perception, interpretation and manipulation of the news which shapes our lives. It is also a heartbreaking account of the effect of corporate greed on the ordinary man.

When a Wall Street investment banker is shot dead while out jogging and later the same day a hedge fund manager is also killed, America is rocked by a terrorist scare. A few days later the searingly ambitious boss of a private equity firm is targeted. Who is attacking the pillars of the financial establishment? Investigative journalist Ellen Dorsey follows a hunch and opens the door on a world of almost unimaginable riches and staggeringly amoral financial and political manipulation.

But this compelling and multi-layered tale of arrogance and greed never forgets that a thriller is also there to entertain and the personal stories and motivation of the characters are what keeps it moving at a furious pace. From the shadowy James Vaughan, head of a huge private equity company and descendant of a family of robber barons who have dominated American business and political life for more than 100 years and now trying to fight off the ravages of time, to Frank Bishop, once an architect, now completely at a loss as to his place in the recession-hit world and whose college age daughter has gone missing, these are believable people – and the personal and public tragedies they suffer the stuff of the 24 hour news channels and tabloid front pages.

This cunningly-plotted, intelligent and well-written book is not for those who want instant action and drama, but builds carefully towards a conclusion which could yet be tomorrow’s headlines. It’s a demanding read that requires real attention, and will appeal to readers interested in how the developed world got itself into such an appalling financial mess through a devastating combination of hubris and greed. This is without a doubt the best topical thriller I’ve read in ages.