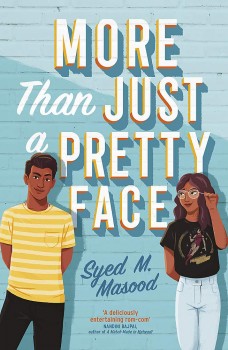 More Than Just a Pretty Face

Danyal Jilani is a constant source of disappointment to his father. Being funny and drop dead gorgeous isn’t likely to lead to a good job, but academic success isn’t Danyal’s strong point, so when he’s unwillingly thrust into an academic championship, life is going to get problematic.

Nineteen-year-old Danyal Jilani wants to be a chef. His parents want him to be a doctor or an engineer, or anything with the prospect of a steady income, and they also aspire to social acceptability for their son within the Desi Muslim community of San Francisco. Danyal’s father worked hard to be able to buy a house, but maintaining it is now stretching his resources to the limit and he hopes for more from his son than just working in a kitchen.

Danyal wants Kaval Sabsvari to be more than just his friend, but everyone thinks she’s out of his league, including Kaval and her family, who don’t consider him to be suitable marriage material. The fact that Danyal is funny and utterly gorgeous isn’t enough to change their minds. Danyal’s parents are keen to set their son up with a suitable wife through a traditional arranged married and want him to meet Bisma Akram.

To be obliging, Danyal takes Bisma out for a coffee, even though he doesn’t find her anywhere near as hot as Kaval. What he isn’t expecting is to learn that Bisma is by no means what his parents would consider suitable if they knew that the Akrams had moved to the area to escape Bisma’s past – a video of her having sex with a boy, taken without her consent, that went viral in her previous neighbourhood.

Danyal is shocked and sympathetic but doesn’t want to get involved. He’s got enough on his plate – literally – trying to hold down his part-time job in a French restaurant while being forced to work, very unwilling, towards a prestigious academic championship in his school called the Renaissance Man. He only ended up being entered for that because he irritated his history teacher, but now he’s stuck with it!

On one level, More Than Just a Pretty Face is a teen romance. On another, it’s a cleverly crafted polemic against one of the UK’s iconic heroes, Sir Winston Churchill, whose policies contributed to the disastrous Bengal famine in 1943 that killed up to three million people. And the problem for Danyal’s Renaissance Man prospects is that his history teacher hugely admires Churchill, so if Danyal follows his urge to shed light on another side of the man, he might well be jeopardising the few academic prospects he has left. The romance side comes as Bisma repays Danyal’s kindness to her by helping him with his project.

This is a book where I strongly suspect opinions will differ depending on cultural and religious knowledge and experience. I can’t say whether the book’s depiction of the Desi Muslim community on the West Coast of America is accurate, with its sprawling collection of honorary ‘aunts’ and ‘uncles’ (terms used for any adult friends of the family that I recognise from my own childhood), and the emphasis on the social importance of food, and the equal emphasis on working hard. There did seem to be an element of stereotyping, with the most religious character (the brother of Danyal’s best friend) showing distinct signs of fundamentalism, so there was something of a lack of nuance that could play to prejudice.

The issues of Bisma’s past were well-handled, and formed a strong theme in the story, allowing Danyal finally to find a backbone when it comes to handling his constantly disapproving father and Bisma’s unsupportive parents who view their daughter as an appalling disgrace to be palmed off on anyone willing to be bribed to have her. I found that an uncomfortable storyline that threw into sharp relief the treatment of girls and women at the hands of men determined to ensure that the ‘honour’ of the patriarchy must remain unchallenged. And on a more minor note, I was surprised that in 2020, any competition in a mixed sex school could go by a title of Renaissance Man!

I enjoyed More Than Just a Pretty Face a lot, and the issues it raises about cultural icons such as Churchill certainly resonates with me in the aftermath of the removal by protestors last year of the statue of a slaver in my hometown. Many people took to the below the line comments on online newspapers to cry, in high dudgeon, ‘Who next, Churchill?’ That’s certainly a discussion that should be held, but only after all the facts are made known, and in that regard, I recommend reading about Danyal Jilani and his school project for more than just simple enjoyment of a well-told teen story.