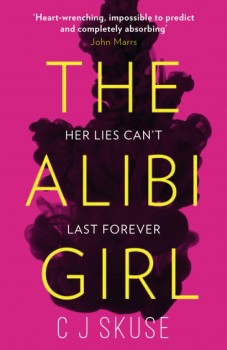 Joanne - doctor, author, or single mother scraping a living - can now add woman with a target on her head to her many personae. It is probably the only believable one.

Joanne could be called a compulsive liar. After all, she assumes a different character for each person she meets. To the saleswoman in a wedding shop she is a pregnant future bride. She is a top author to the cute guy in the doughnut van. She is a struggling single mum with an iffy ex to the personal trainer living two flights up in her block of flats. The list goes on.
But then Joanne isn’t her real name either. And surprise, surprise, her hair isn’t black any more than her eyes are brown. So, the compulsive liar could also be called a woman with a reason to hide.
Though she hates her life, she thinks her extreme measures are working, until the phone calls and the catalogue. When someone who looks like the woman under Joanne’s disguise is murdered in the hotel where she works, Joanne knows it was her they were after. And now Joanne needs to run.

Skuse has a gift for creating characters that leap off the page and into your heart. She has mastered the genius of twisting dangerously flawed with touchingly gentle. Her main characters are real, and people that stay in the reader’s head long after closing the book.
It is extremely difficult to give the reader a taste of the story without giving secrets away. And boy, does Joanne have many secrets. So, forgive me for the hints and zest-but-no-fruit tactics. This is one of those books you should be squirrelling into, not reading about.
The childhood flashback scenes drip with senses-driven writing, capturing the magic of summer, of lazy afternoons, of school holidays, of make-believe. The feelings, experiences, and emotions that Joanne had as a child are utterly convincing and oozing nostalgia. This is the reason Joanne or whoever she is, despite her dark side, is likeable, relatable, and easy to invest in emotionally.
The truth flutters onto the page little by little, like dandelion seeds in a breeze, revealing the reason this emotionally fragile woman has invented a plethora of personas. She may chop, change, and shed her personalities like snakeskin, but they are the only thing between her and death. At times, Joanne’s introspections and beliefs are so infantile that it makes for reading that is uncomfortable, heart-breaking, and memorable in equal measures.
Yet again, Skuse has written a vibrant, sharply sardonic, and genuinely entertaining crime thriller. However, I would say that this is as much about mental health, family, loyalty, compassion, the tenacity of childhood memories and their persistent effect on us into adulthood as it is about crime.
Though there is less dark humour in this story than in Skuse’s Sweet Pea series, there is just enough to lift the reader out of the bleakness that settles in during the first half. The ending is cheesy. But somehow it is all forgivable, particularly when one reads the last page. I so didn’t see that one coming. It is still playing with my head even though I am already reading another book.