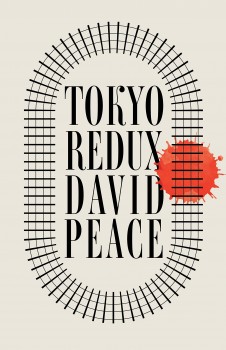 The death of a prominent official in post-war Japan remains a mystery to this day, but the circumstances are explored through the lives of fictional characters who were touched by the event.

In July 1949 Japan, great hardship remained widespread despite post-war reconstruction; the USA remained in control but faced increasing resistence, especially from communist-inspired groups. In this febrile atmosphere, Shimoyama, president of the National Railways of Japan, goes missing during the mass lay-off of one hundred thousand employees.

The first part of this book follows American detective Harry Sweeney, leading the investigation on behalf of the US authorities. Sweeney seems to have a burden of guilt about some undisclosed matter, which may lie behind his frenetic activity following up leads. There are a suspiciously high number of witness reports, many contradictory, and several conspiracy theories including one in particular pushed hard by Harry’s boss.

The action then jumps to 1964 when private investigator Murota Hideki is seeking writer Kuroda Roman, who claims to have uncovered crucial facts about the Shimoyama case. Hideki is also working a more routine marital dispute, but after an apparent suicide he realises that he has been set up, presumably to derail his enquiries into areas certain persons want kept quiet.

The final part is set in 1988, when the ageing CIA agent Donald Reichenbach is forced to face his part in the mystery. Someone arrives from the USA to ask questions about what happened to Harry Sweeney. Reichenbach recalls a casual remark during a drunken conversation in a nightclub, since when he has blamed himself for a course of events he now recalls with horror.

The whole conveys some of the public interest in the Shimoyama case, which the author indicates had a domestic political and cultural importance to rival the assassination of JFK. He gives an extensive bibliography. Whether you accept the author’s pointers about responsibility, the picture of Japan is an interesting and convincing one, with the three sections tied to memorable events: the US-led Occupation, the 1964 Olympics, and the failing health of the Emperor in 1988.

The style of the book is also interesting. Some books tell you what the protagonist is thinking, others rely solely on dialogue and action and let the reader imagine. This book is an extreme example of the second case, and as the author gives no clues as to what anyone is thinking, he has dispensed with inverted commas for dialogue and can do this without giving rise to confusion.

The action is delivered in a heightened state of emotional tension throughout, delivered by intense focus on detail and repetition of key motifs. The narrative varies in form from short punchy sentences to long passages of almost stream-of-consciousness to convey mood. The whole is strikingly unusual and makes a powerful statement.