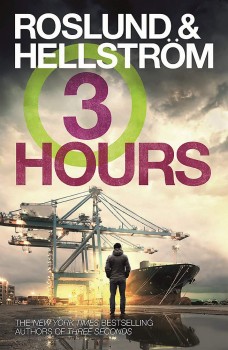 DCI Ewert Grens starts investigating a strange case of one corpse too many in a morgue. This leads him to a Stockholm’s harbour where he makes a horrendous discovery of 73 refugees suffocated in a cargo container.

3 Hours moves effortlessly between two continents and completely different locations, the seemingly civilised Sweden and the less so Niger and Libya, but even though the perception of these countries is of contrasting morals, what really ties them together in this context is just the harsh criminal barbaric trade in human beings.
It all starts in Stockholm. DCI Ewert Grens receives an emergency call to a morgue whose inventory is showing one corpse too many. This impossible situation leads him to Värta Harbour, one of the largest port areas, and centre of international ferry traffic where he discovers a horrendous cargo: the dead bodies of 73 refugees, suffocated in a container.
The initial investigation directs Grens and his excellent team of main players Sven and Mariana to another mortuary where more unidentified bodies are found and to the complicated tunnels underneath the city. This was the route to transport the dead. The shocking discovery means that the people responsible for the mass killing know the underground area well and might be within the police’s reach.
Next stop is Niamey in Niger, a West African city unheard of by many people. Grens decides to search for a man he had hoped to never see again after his last escapade in Colombia. Yet now he needs to find Piet Hoffmann whose fingerprint was lifted from one of the victim’s phones.
The ex-convict, former-government informer and Gren’s nemesis-turned-ally, is forced to infiltrate the brutal ring responsible for the container corpses – the organisation is known for brutality and greed, and treating the refugees worse than animals, even worse than cargo weight. Hoffmann really has no choice but to agree to a two-week period to unmask the top figures so he can return to his wife and two young sons. His family is supposed to be safe in a quiet Stockholm suburb yet is also connected to the vicious operators and hence in danger. Two weeks become three hours, and the tension goes through the roof.
Hoffmann’s life consists mostly of being on the run ‘from a life sentence in a Swedish prison, from a death sentence from the Polish mafia, then another one from the White House, and then one more from a South American drug cartel.’ Lying has become his second nature and a powerful tool to infiltrate dangerous criminal organisations, and in this case the corporation specialising in human smuggling of desperate African refugees to Sweden and Germany. Violence is a by-product, yet we still root for him.
Anders Roslund and Börge Hellström excel in creating intense compelling plots encompassing huge international matters and ordinary human existence, including major social issues without lecturing or judging, even if their stance is absolutely clear.
Occasionally the duo leaves more questions than answers as to how the moral compasses should work. And these compasses of course swing in various directions depending on personal circumstances. In 3 Hours, translated by Elizabeth Clark Wessel, as the narration unfolds levels of connections between good and evil, the complexity of the characters shines throughout and keeps you on the edge of the seat.