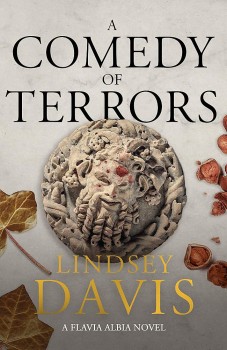 A Comedy of Terrors

While Roman detective Flavia Albia tries to come to terms with a new role, her magistrate husband becomes involved in a case which threatens not only the family but also the future of the empire itself.

Roman private eye Flavia Albia is back. She’s the adopted London street-child daughter of legionary soldier/con-man/dodgy auctioneer/detective Marcus Didius Falco, friend of emperors and a man with an eye always for the main chance.

This amazing series – this is book 29 – covering a period of more than 40 years in the history of the vibrant, squalid and dangerous heart of the Roman empire once again emphasises Lindsey Davis’ magical ability to immerse the reader in Roman life.

It positively crackles with knowledge of the city and its people, mixed with social comment, ingenious and bloody plots and sharp observational skills leavened by more than a smattering of genuine and sometimes earthy humour.

Flavia Albia is just too much of her adoptive parents’ daughter. Now maturing into a very British/Roman matron, she combines Falco’s total disregard for the customs of her time with Helena Justina’s aristocratic skills of being able to exploit her position.

The winter holiday has always been a difficult time. As domina of the house Flavia Albia must deal with her own version of domestic problems. She and magistrate husband Tiberius have taken in the two young sons of his dead sister, so not long married, she must deal with upset children, overexcited by the approach of the winter feast of Saturnalia; a rapidly expanding household; bilious guests, many of them members of the Didii family, who have already taken advantage of the season’s traditional excesses, and too many practical jokes.

To add to this her work as an informer, which she had hoped to continue, has virtually dried up and the aedile Tiberius is preoccupied with what looks like developing into a local Nut War – nuts are a key part of Saturnalia, the celebration of the re-birth of the sun, important both for eating and throwing at other drunkards, so there is a quick fortune to be made from market domination.

During the holiday, restrictions were relaxed and the social order inverted. Gambling was allowed in public, slaves permitted to use dice, did not have to work and each family elected a Lord of Misrule from among them – but there was a darker side and Davis is quick to remind her readers that Saturn, a deity of the earth and underworld, was an adaptation of the mythical Greek Titan Chronos who ate his own sons to avoid them overthrowing him!

Like most party seasons there’s rituals and traditions, festival decorations, presents to be given, endless visitors and celebration feasts for Flavia Albia to organise. The two grieving boys soon bond with even more household additions – a donkey and a newly acquired sheep – to begin to acquire a sense of familiarity and finding joy in childish jokes.

Amid all this she becomes involved with a finagling possible client, anxious but afraid to leave her loan shark husband, a man of the edge of a reviving criminal fraternity. Flavia Albia refuses to be overcome by it all, but the upright Tiberius, immune to bribery or status, soon finds his interests in the Nut War make him a target of powerful and ruthless gangsters. The family is subjected to none too subtle threats – and traders who refuse to buy the rotten nuts are murdered in grisly ways as a warning to others.

While the mad Emperor Domitian promises the people of Rome a spectacular entertainment to crown the celebrations and even Roman law and order takes a holiday break, Flavia Albia’s inquiries throw up a far wider scheme behind the extortion, which if successful could threaten the city and empire itself.

Davis’ Rome of 89AD is gloriously real and sinister in equal measure, its wonders balanced by its brutality, poverty, filth and criminality. Her lively prose, often biting wit and fascinating and unique historical detail make this another compelling and enthralling read.

Flavia Albia is not happy about the potential loss of her career – and as narrator is willing to discuss it in an easy tone with a touch of stroppiness in her attitude that makes her so modern and easy to relate to. The book also raises for the first time the question of what happens next. The impending end of Tiberius’ term as aedile is reflected in the greater part he is allowed to play, but the introduction of major underworld figures and an increasing domestic burden for Flavia Albia seem to point to the possibility that this wonderful series is heading for some kind of denouement.