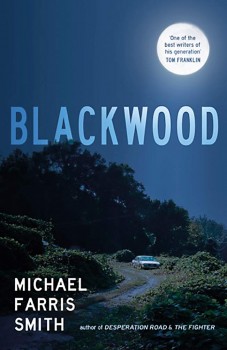 The dying rural backwater of Red Bluff, Mississippi, is briefly awoken from its slumber when new arrivals appear in town and locals go missing in the sinister nearby blackwood.

This is the latest in a line of novels by Michael Farris Smith featuring damaged characters in poor, out-of-the-way American towns. A brief opening chapter describes an episode in which a young boy, Colburn, witnesses his father’s suicide. The book proper is set in 1976, 20 years later, when Colburn returns to Red Bluff seeking some kind of resolution of the anger and pain he feels about the hand life has dealt him.

At the same time, a man, a woman and a teenage boy arrive in town in a car which can take them no further. The three are almost feral, stealing and scavenging off the meagre pickings available from the back of the stores in town before setting up camp under the dense cover of a blanket of kudzu which has overgrown the valley outside of town.

Myer, the sheriff, notes the arrival of these newcomers and ponders what action he should take, but in the end allows events to take their course. As is the way in small towns, there is plenty of gossip. Colburn takes advantage of one of the empty stores offered to weld metal sculptures, but locals view him through the prism of his history and only Celia, who runs the bar, shows any sort of sympathy or understanding.

Meanwhile, the other newcomers quickly lose what minimal cohesion they brought with them. The boy shows signs of responding to Celia’s kindness, but is so badly educated he is barely able to communicate. The woman is tortured by thoughts of a baby the man forced her to abandon in their travels. The man starts to lose his grip on reality entirely and begins to hear voices. When people go missing, it looks as if there is something nasty operating in the blackwood, and events amply vindicate the locals’ worst nightmares.

It is difficult to envisage Smith’s stories in any other country than the USA; aggressive individualism seems to leave space for appalling failures in families and in the care of children in particular. Of course his protagonists are clearly exceptional, but the writing certainly brings them to life and imbues the stories with a sort of raw truth about people who fall into cracks in the pattern of the supposedly ordered society around them.

The blackwood, the kudzu-choked valley, is also depicted convincingly enough to explain how local fears about ghosts and belief in the benefits of incantations in various forms can arise. The author’s prose, at times almost lyrical, skilfully builds up a powerful atmosphere which acts as a counterpoint to the dark picture of human tragedy played out within it.