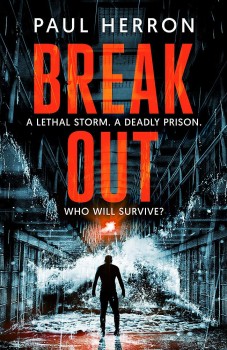 With two hurricanes on collision course, the staff of Ravenhill maximum security prison decide to evacuate, leaving the inmates to fend for themselves. But in the middle of a riot and a superstorm, all ex-cop Jack Constantine wants is revenge.

Ravenhill penitentiary is a maximum-security prison full to bursting with dangerous offenders – the sort the justice system is only too glad to slam the door behind and throw away the key.

Jack Constantine is a former cop locked up for killing one of the three men who murdered his wife in a burglary. Life inside Ravenhill is tough, but Constantine just wants to keep his head down and avoid the worst of the gangs and the crazies,

When two hurricanes combine into a superstorm of epic proportions, they are forecast to wreak havoc across Florida. An evacuation order goes out across the state and Ravenhill, close to the coast, is right in its path. As the storm mounts in intensity, the staff decide to save themselves and flee the path of the storm. During their hurried evacuation, the internal doors are unlocked and the penitentiary descends into volent conflict, with the gangs more intent on tearing each other apart than anything else.

In the midst of the chaos, with the sprawling complex of buildings threatened with collapse, all Constantine wants to do at first is stay alive, but then he learns something that changes everything. The other two men involved in his wife’s murder are in Ravenhill as well. And now revenge matters more than self-preservation.

Breakout is one of those books that grabbed me by the throat and didn’t let go. The action is fast and bloody, with no punches pulled, and the pace is as relentless as the approaching storm. Constantine teams up with new prison officer, Keira Sawyer, left behind when her colleagues decide to try to save their own skins, and his cell mate, the affable but very dangerous Felix, and together they try to survive the brutal riot that is kicking off all around them as Constantine’s past comes back to haunt him in more ways than one.

Constantine is a man with a very chequered past not above planting evidence to take down a drug lord who had managed to evade conventional justice. It’s just bad luck that throws the two of them together in the middle of a riot. Malcolm Kincaid wants revenge as much as Constantine does and their deadly game of cat and mouse is played out against a background every bit as good as that of Tim Willcock’s classic Green River Rising, a book that for me absolutely defined the prison thriller.

Through the medium of Paul Herron’s spare, but vivid descriptions I was able to visualise easily the sprawling penitentiary complex and follow the progress of Constantine and his allies as the buildings are quite literally blown apart around them by the force of the storm. There are no good guys in this, just some less bad ones, but it was surprisingly easy to get attached to some of the characters, and Herron has a talent for making even seemingly inconsequential deaths count. The sting in the tail, when it came, was as unexpected and painful as a scorpion strike.

This is a stylish, heart-pounding thriller that would make one hell of a good film.