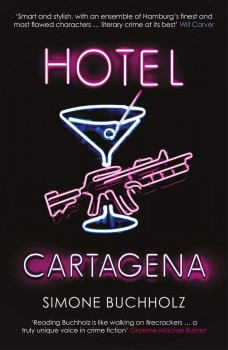 A top-floor Hamburg hotel bar with a party of police amongst the guests is invaded by a dozen men with weapons who take everyone hostage.

This book takes the familiar form of two interleaved stories which are brought together before the final section. The first concerns Hemming, a youth from a broken family in Hamburg who breaks out of a life of petty criminality by taking a boat to South America in 1984. He ends up in Colombia where he finds bar work, and a wife.

His life takes an ominous turn, however, when he is introduced to a man who suggests he return to Hamburg and find distributors for Colombian cocaine. Henning agrees, business goes well and for more than a decade the profits roll in. Then comes a bust, somebody talks and the cartel exact a terrible penalty for their losses.

The other story centres on a public prosecutor and friends, including several police, celebrating a birthday in a bar on the 20th floor of a Hamburg hotel. One of their number, Stepanovic, is late but by the time he shows up the bar is sealed. It has been invaded by heavily armed men, who have made it impossible for the various police agencies outside to enter without putting the lives of the hostages at risk.

The tension inside the bar is palpable, especially as for some time the objective of the invaders is unclear. The viewpoint inside is told in present tense by Chastity, who at the inception of the action cuts herself on some of the fruit salad supplied with her drink. As sepsis starts to set in her commentary becomes increasingly wild.

Chastity is clearly a woman of some spirit. For one thing she is in relationships with at least two of her group in the bar and also makes it clear that she finds the leader of the armed group sexually attractive. Her thoughts are not what might be usually expected from a hostage, and as the blood poisoning takes hold the speech in the bar becomes rendered in poetic form. The effect is to provide a strangely warped impression of events.

Eventually the objective of the raid becomes clear, centred on one particular person in the bar at the time. What is revealed left me with little concern about this victim, but with more interest as to how the invaders would escape.

The story is well-translated and a quirky humour comes across, particularly in the chapter headings which comprise a short phrase drawn from the text. My only difficulty is with certain plot points, like why it should have been necessary to take over a hotel bar for the purposes depicted, and the sepsis. But I shall certainly take greater care with the slice of pineapple I get on my next cocktail.