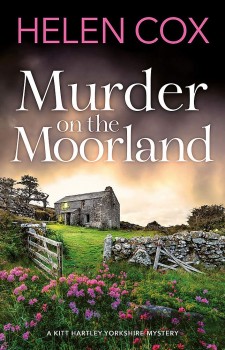 Murder on the Moorland

Librarian-turned-detective Kitt Hartley heads for the moorland village where her boyfriend’s ex-wife was murdered five years before to solve what looks like a copycat killing – right down to the runic symbols carved into the victim’s hand!

Who knew libraries and archives could hold so many secrets and become the hotbeds of such ambition, greed and violence? But this is north Yorkshire where even cosies are tough enough to reflect the beautiful yet brutal, isolated moorland landscape.

Helen Cox’s third in the series featuring her librarian-turned-detective Kitt Hartley is decidedly darker than her earlier adventures. While offering the same atmospheric charm, eccentric characters, an intricate plot and some genuinely amusing moments, this attempt at a literary Golden Age mystery falls short on several fronts.

Cosies in general are a subgenre in which sex and violence occur off stage, the detective is an amateur sleuth, and both crime and detection take place in a small, socially intimate community.
The graphic sex, gruesome crime and violent ending here doesn’t really fit the bill and would have many Golden Age authors spinning in their graves.

Add to that the massive suspension of belief required to accept that the murder victim was prescient enough to predict her own death; smart enough to leave clues to the killing written in Anglo-Saxon (as everyone does, of course!) scattered about, but stupid enough to take no precautions other than buy an illegal pistol are a bit much to swallow!

The idea of a librarian sleuth at the heart of a mystery series is fine, and as it develops Cox’s protagonist Kitt, whose detective ‘knowledge’ has been gained from years of reading novels from Christie to Rankin, seems to be losing her cloak of fabled Yorkshire bluntness. I have always found her rude, sarcastic, arrogant, mean and thoughtless, dismissing those she considers not as intelligent as she is, but love does seem to be mellowing her – and her previously appalling dress sense.

The man in her life, Detective Inspector Malcolm Halloran, the main focus of the story, lost his wife to a serial killer – another policeman – five years before in the same village where the latest killing has occurred. It is identical, right down to the runic symbols carved into the victims’ hands. Even though this isn’t his case and he has been specifically warned off by senior officers, Halloran, who is still deeply affected by his wife’s death, cannot stay away.

Kitt takes holiday leave from the library and joins him in the village. The investigation, at first with the co-operation with local officers, becomes deeply personal to both of them and decisive for their developing relationship. As usual she enlists the help of eclectic characters from previous stories, including self-appointed psychic Ruby, to solve this case.

Despite the fact that this story is not without its faults, I enjoyed it and am beginning to warm to Kitt the detective. Cox, whose previous literary ventures were non-fiction or romance, really knows how to write. There is a literary connection, complete with complex clues, and of course, conveniently, a librarian on hand to solve them. The clues, twists and red herrings are cleverly placed, although the action-packed denouement stretches the imagination more than a bit.

There are some lovely descriptions of the moors and their unique inhabitants; fun references to classic detectives; and wonderful send-ups of the pompousness and intellectual snobbery of many involved in the antiquarian field.

This is a fine addition to what has been a developing and interesting series. If the flame-haired Kitt continues like this, she’ll never be cosy, but I may even grow to like her in the future!