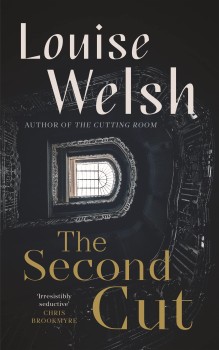 When Glasgow auctioneer Rilke’s old friend Jojo is found dead in a doorway, the police don’t seem that interested, but unlike them, Rilke isn’t quite so ready to write off Jojo’s death as an unfortunate by-product of a dissolute lifestyle.

Rilke – just Rilke, or Mr Rilke, if you prefer – works at Bowery Auctions, and has done for the last 45 years. The auction trade isn’t what it was, and it’s got harder to make an honest living, although Rilke has at least tried to stay out of trouble. It’s certainly a while since he’s been picked up by the police for what used to be referred to as lewd behaviour.

When The Second Cut starts, Rilke is at the wedding of two gay friends, doing his best to save the happy couple and their guests from too much embarrassment from Jojo, who’s way more pissed than he should be, and is getting increasingly raucous. Eventually, Rilke hauls him off to a pub and Jojo entertains himself, as he usually does, scrolling through profiles on Grindr, looking for his next hook-up. Rilke’s in no position to judge, and judging isn’t Rilke’s thing, anyway.

Before Jojo wends his unsteady way into the night, he gives Rilke a small bottle of dodgy-looking liquid to pass onto the two Bobbys as a wedding present and, in return for 30 quid, gives Rilke a tip off about a big house in Galloway that needs clearing in a hurry. That’s the last time Rilke sees Jojo alive. The following day, Jojo has been found dead in a backstreet doorway, and Rilke is asked by the police to identify his body. The police seem happy to put his death down to recreational drug use and an excess of casual liaisons.

Rilke isn’t quite so inclined to just write off his friend’s death as no more than the by-product of a dissolute lifestyle, especially when he finds a large stash of the glass vials in Jojo’s flat and starts to wonder what the hell Jojo had got himself into. To Rilke’s surprise, the tip-off about the clearance job turns out to be a good one, which highlights his sense of vague guilt, and he starts digging. But he soon discovers that some secrets are better left buried …

This was my introduction to the endlessly fascinating, sometimes seedy and always darkly humorous world of Rilke and Bowery Auctions, run by the chain-smoking, wine-drinking Rose, who has an on-off relationship with world-weary Glasgow copper James Anderson, who went to school many years ago with Rilke. I enjoyed The Second Cut so much I promptly went off to read Rilke’s first appearance in author Louise Welsh’s debut The Cutting Room, published nearly 20 years ago, which is every bit as good as this outing. In The Second Cut, Rilke has aged in real time, but hasn’t changed much, although his resemblance to an animated corpse has become more pronounced. He’s still got a wry attitude to life, a dry sense of humour and a knack for getting himself mixed up in things other people would sensibly walk away from.

Seeing Glasgow through Rilke’s eyes brings to live the darker side of the city that it mostly keeps hidden from tourists. The descriptions are vivid, Rilke’s sardonic asides are always amusing, and the dialogue and prose take on a life of their own without ever becoming incomprehensible. Welsh has a sure hand with dialect and speech patterns, making it easy for me to hear the characters’ voices and smell the dank air of an old house as Rilke goes about his business cataloguing and selling antiques and junk alike.

Rilke’s tendency to get into trouble hasn’t diminished over the past 20 years, nor has his ability to join the dots until they make a pattern that other people want to ignore. He ends up deep in the mire of illegal drugs and forced labour, not knowing who he can trust. Welsh’s window on Rilke’s world is a dark one and through this particular looking glass most things come in shades of grey, some darker than others. In the general gloom it’s hard to distinguish friend from foe, especially during a tense, utterly gripping finale.

I sincerely hope I don’t have to wait another 20 years to meet Rilke again. I’m sure he’ll be still getting into trouble and copping off with unsuitable men in his 80s, but I’m far too impatient to wait that long, and he’s far too good a character to consign to the shadows for another two decades.