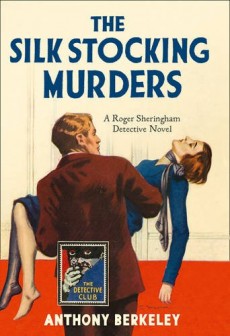 A vicar’s daughter goes missing and Roger Sheringham, a crime writer and amateur sleuth, is asked to investigate. This simple case leads to a chase to stop a serial killer from striking again.

Roger Sheringham, newspaper columnist, crime fiction writer and amateur sleuth, is tasked with tracking down a vicar’s daughter who has moved to London to make her fortune.  When he discovers that she was working as a showgirl under a pseudonym and has committed suicide, his main task appears to be how to tell her father with enough tact to soften the blow. But other suicides of women come to his attention and they have all died the same way: hanged by a single silk stocking on the back of a door.

Sheringham is suspicious that there’s a serial killer at work, so he does the sensible thing and goes to Scotland Yard to find that they, too are looking for a killer. Working with, if not always together, the police and Sheringham must puzzle out the method and motive for these deaths. And a puzzle it is, as Sheringham and a team of his friends work hard to find the clues and to fit them in with the psychology of the killer. And are all his friends as innocent and straightforward as they seem?

This book is full of the charm of a bygone era. It is a masculine world of clubs, pubs, offices and bachelor flats where you can smell the leather and tobacco smoke. There are leisurely alcohol-laced lunches and suppers.  Girls intrude and can be plucky sorts, but in the end it’s about the chaps dealing with other chaps. In this world vicars inevitably have large families, but are still considered to be part of good society and socialise with people who go to Monte Carlo on holiday. And in the detecting world fingerprints are the height of forensic science.

Less charming is the casual anti-semitism laced through the book. And for all the detective puzzle-work, Sheringham’s solution is to simulate a crime and wait for the killer to incriminate himself. It was only me wanting to know if I had guessed the killer correctly that got me to the end of the book.