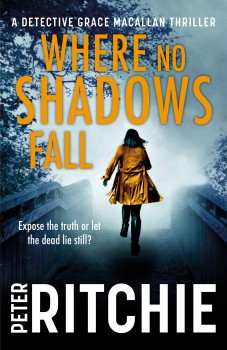 Formerly a criminal investigator, Superintendent Grace Macallan is stuck behind a desk and, unable to stand it any longer, requests a transfer. It so happens that a notorious Glasgow gang member has apparently committed suicide whilst in prison. Grace is given the task of investigating the suicide and compiling a report.

Peter Ritchie writes a note of thanks to the Barlinnie authorities for having allowed him access to those parts of the prison that visitors never see. He says it opened his eyes to the full horror of what life there is like, both for the prisoners and the staff.

The first few chapters describe Tommy McMartin's life in the prison and indicate just how much worse it was for a well-known gang member. There was no escape from members of another gang who wanted to humiliate him. Even when he manages to get himself transferred to another wing, mainly containing men guilty of sexual crimes, where rapists are at the head of the hierarchy and paedophiles at the rear, he can find no peace. These scenes may be distasteful, but they form a realistic and totally gripping introduction to the novel.

Superintendent Grace Macallan, having made a decision that she needed to devote more time to her children and partner, had given up her job of fighting terrorists and criminals and opted for a relatively quiet life back in uniform. Her female boss, Chief Superintendent Tenant, had given her the task of heading a project to look at ways of improving intelligence development with other agencies. It is not long, however, before she comes to realise that the job is not only a sinecure, but also a boring sinecure. When, therefore, she is offered investigative work once again she discusses it with her partner and both agree that she should take it.

The investigation she has been asked to undertake is into the apparent suicide in Barlinnie prison of a young man named Tommy McMartin. He was no ordinary criminal. He was part of the Glasgow gang headed by 'Slab' McMartin and, since Slab was getting old, the most likely man to take over the leadership of the gang. Slab had had two children, Bobby and Brenda, now adults, but he despised both of them and had long ago decided that neither was capable of taking over when he retired. The death of Tommy, Slab's nephew, left the gang virtually leaderless and on the point of disintegration.

Having completed the report on her project, Macallan is not in the least surprised when it is more or less shelved. Her task now is to look into Tommy's suicide. There is, however, a problem – she is not entirely convinced that he had killed himself. Nor is it very long before she finds herself wondering whether he should have been in prison at all. He had been found guilty of murder, but the motive had never been made clear.  Macallan is aware, however, that her remit is to investigate his death in prison. Whether or not he had been guilty of murder ought not to be her concern. She frequently tells herself this but finds it more and more difficult to keep the two issues separate – a conflict that provides the main thrust of the story.

Much of the plot involves the description and workings of Glasgow gangs and one receives the impression that the author – a former police officer – has an almost encyclopaedic knowledge of the way they function. In some ways this is depressing because they don't appear to have changed to any great extent over the years, violence being the answer to most problems.

Value judgments aside, however, what we are presented with in this novel is wholly convincing and keeps the reader's interest until the last page. There is, perhaps, one minor quibble. It is not entirely clear why we are presented with the 'stranger' who haunts Macallan, nor precisely why he wishes her dead.

Finally, mention should be made of the characterisation. Great care is taken to present us with real people and even the monstrous ones – MacManus and Brenda – are entirely believable. I was even prepared to accept that a former member of a murderous Glasgow gang finds it possible to abandon that way of life and join the Salvation Army.