We think most crime fiction readers would admit that leaving your disbelief at the door is part and parcel of the deal. After all, who believes there really are that many killings in Midsomer Murders’ corner of middle England … For this issue our reviewers did a fair bit of asking the cloakroom attendant to look after their disbelief when they checked in.

The question of how often Jack Reacher washes his underwear has kept your editors sniggering happily for several years. Sylvia Maughan is considerably more polite than Linda and Sharon, although she had doubts about The Sentinel, Lee Child’s collaboration with his brother Andrew before he hands over the reins for good. Sylvia says it’s an enjoyable bit of escapism, but lacks some of the appeal of the originals, not least because of a not very charismatic cast.

John Cleal is enthusiastic about Last Survivor by Tony Park, which not only provides us with a fascinating botany lesson, but also pits some South African old-timers against some young jihadists. John says he knows who his money is on in the battle to recover the only example of the world’s rarest plant stolen from the private game reserve of a Kuwaiti prince – and it’s not the young ‘uns! John Verpeleti was left scratching his head at Chris Hauty’s Savage Road, where the president of the US is a Russian mole and his handler has to ensure that a current series of cyber-attacks does not escalate into war. John says there’s no shortage of pace, excitement and action, but the yarn does get a tad unbelievable in places.

We maintain staunchly that authors often have to work twice as hard to convince us that amateur sleuths are viable investigators. Journalists get a pass, as it’s their job to ask questions. Kerry Hood devoured the reissue of Jim Kelly’s The Moon Tunnel, set in Cambridgeshire’s fenlands, where local paper reporter Philip Dryden discovers that a man found dead in one of the escape tunnels dug by POWs held in a World War Two camp was on the way into, not out of, the compound. Kerry says it’s a wonderfully involving adventure. Helen Cox’s librarian-turned-detective Kitt Hartley has been rather a Marmite character for John Cleal in what he describes as a developing and interesting series. Murder on the Moorland features some lovely descriptions of the moors and their unique inhabitants, fun references to classic detectives and wonderful send-ups of the pompousness and intellectual snobbery of many involved in the antiquarian field. And John may have warmed just a tad to the main character!

If you want gritty realism, you’ll get the former but maybe not the latter in Ken Bruen’s Jack Taylor series! Sharon Wheeler has been hooked on the noirest of noir adventures of the Galway PI since the start. A Galway Epiphany has Jack being hit by a truck and then miraculously recovering and getting entangled with dodgy nuns, arsonists, wife-beaters and supposedly saintly street kids. Sharon says it sounds bizarre to say that the book is a pleasure to read, given how dark it is. But it really is!

Linda Wilson is totally shameless when it comes to snaffling willy-waving thrillers – and she never saw a bad boy hero that she didn’t like! Break Out by Paul Herron has ex-cop Jack Constantine looking for revenge after the staff of Ravenhill maximum security prison decide to evacuate as a super-storm hits, leaving the inmates to fend for themselves. Linda says that there are no good guys in this, just some less bad ones, but that it was surprisingly easy to get attached to some of the characters – and that it would make one hell of a good film. She was also taken with the competent, no-nonsense characters in Run for Cover by Michael Ledwidge, where ex-navy Seal Michael Gannon helps a friend and former colleague investigate the murder of his brother by a sniper in a national park. And Linda says that a few big bangs never go amiss!

When it comes to this issue’s Euro books, we have good advice for you from Chris Roberts – beware of slices of pineapple! Hotel Cartagena by Simone Buchholz features a top-floor Hamburg hotel bar with a party of police amongst the guests that is invaded by a dozen men with weapons who take everyone hostage. Chris enjoyed the quirky humour as well as offering the fruit lowdown! And who knew that cruise ship murder mysteries were a thing … If they’re the next genre trend, Linda Wilson is already hooked. Police psychologist Martin Schwartz lost his wife and son five years ago on a cruise. And when someone tells him there was more to their disappearance than a tragic accident, he has to investigate. Linda describes Passenger 23 by Sebastian Fitzek as a very complicated, very clever story set in a simultaneously vast but claustrophobic super-liner. Ewa Sherman also found herself longing for open spaces – she says that Ragnar Jónasson gives a masterclass in isolation and claustrophobia in The Mist where Erla and Einar live in an isolated farmhouse in the eastern part of Iceland. A strange visitor arrives during a snowstorm just before Christmas. As the telephone stops working and electricity dies, the unsettling atmosphere intensifies …

We can give you a lift to ancient Rome and then 1940s Lisbon in this issue’s historicals. John Cleal is very fond of Lindsey Davis’s Flavia Albia series. He says that A Comedy of Terrors crackles with knowledge of the city and its people, mixed with social comment, ingenious and bloody plots and sharp observational skills leavened by more than a smattering of genuine and sometimes earthy humour. City of Spies by Mara Timon has SOE agent Elizabeth de Mornay fleeing Paris in 1943 for neutral Lisbon, where she finds plenty of enemy intrigue to keep her occupied. Chris Roberts felt that the book falls into the trap of bigging up the protagonist’s skills so far that she never seems to be in any real danger.

It's quiet on the police procedurals front this time, but The Whole Truth by Cara Hunter is a good ‘un! DI Fawley and his wife Alex are expecting a much longed-for child and everything in the garden looks lovely – until the release from prison of a vicious and vengeful rapist and murderer threatens to blight their happiness. Viv Beeby says it’s a perfect choice for lovers of a traditional whodunit and for those who also like a cast of supporting actors who develop as the series progresses.

And the YA offering is also outstanding according to Linda Wilson. Eight Pieces of Silva by Patrice Lawrence has 18-year-old Silva looking after her 16-year-old stepsister Becks while their parents are on a belated honeymoon to Japan. But when Silva doesn’t come home, Becks decides to check out her bedroom and then her worries really kick off. Linda says that Lawrence’s writing is vibrant and leaps off the page, as do her characters.

All aboard as Chris Roberts scoots from Bangkok to rural Mississippi. He describes The Glass Kingdom by Lawrence Osborne, where a woman takes refuge in a crumbling tower complex in Bangkok after defrauding her New York employer, as an unusual crime story that keeps the reader guessing about its direction. Blackwood by Michael Farris Smith has locals going missing in the sinister nearby blackwood in the dying rural backwater of Red Bluff, Mississippi. Chris says the author skilfully builds up a powerful atmosphere which acts as a counterpoint to the dark picture of human tragedy played out within it.

Kati Barr-Taylor is very long-suffering when it comes to reviewing domestic noir and books featuring dodgy couples! But then she does uncover some unexpected gems … JS Monroe is destined to become her guilty pleasure after Kati devoured The Other You where Kate may have lost her outstanding memory for faces, but she is certain the man in front of her is not the man she loves. Kati had a shed-load of reservations, warns that there is far too much repetition and waffle, but says that the book is easy reading escapism! And she found herself thoroughly invested in the characters – even those she didn’t like – in The House of Whispers by Anna Kent where blast from the past Grace is back in main character Abi’s life, dripping toxins into an already fragile status quo.

And finally … We have sci-fi for you in the shape of Future Perfect by Felicia Yap. In the near future, software has been devised that predicts the future with surprising accuracy. The only problem is that being given the probability that you will die the next day is not necessarily what you want to hear. Nor do you want to discover that analytic software identifies you as a potential murderer. John Barnbrook was thoroughly hooked and says you’ll never look at Alexa the same again!

Please welcome author Isabelle Grey to the Countdown seat. She has some eclectic places to run away to, including Camber Sands, which made Linda twitch nervously after a traumatic weekend there some years ago! We definitely liked the sound of Gibbes beach in Barbados, though. And we think we should invite Isabelle for a drink and then let her rant!

Take a look at what Reviewing the Evidence have been up to and catch up with their latest reviews of US and Canadian releases.
If you’d like to be included in our fortnightly update email, drop us a line (the email address is on the site).
If you're following us on Twitter, you can find us chatting at 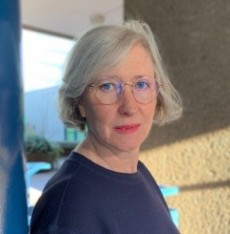 Crime novelist and screenwriter Isabelle Grey writes books under the name of VB Grey. She was born in London and grew up in Manchester. The city’s history of radicalism, her school (once attended by the Pankhurst sisters), university college (a pioneer of further education for women) and being a young teenager in the late 1960s all combined to encourage her to dream of following in the footsteps of Joan Didion, Hunter S Thompson, Tom Wolfe and other trail-blazing New Journalists.

She got as far as writing a book about the punk movement, and then got side-tracked into writing about 19th and 20th design for The Times’ Collecting column before emerging as a feature writer and reviewer for a wide range of newspapers and magazines in the UK and in America.

An introduction to the producer of the landmark BBC adaptation of Tinker, Tailor, Soldier, Spy led to a commission for an original TV drama series. She found screenwriting even more exciting than journalism, and a long career in fiction has followed.

But she still wishes she’d been a gonzo BBC foreign correspondent in Washington.

Computer screen
Mug of green tea
A faded cardboard pen-holder my daughter gave me when she was little
Books from every period of my life
A sofa that badly needs re-upholstering
Richly decorated pots by an old friend, Janice Tchalenko, who is sadly no longer with us
Nasturtiums I grew from seed on my windowsill
Sky
Rear Window-style glimpses of the lives of my opposite neighbours

Scrambled eggs with smoked salmon on toast and a glass of red wine.